The ministry of road transport and highways recently notified that the provisions of the Motor Vehicles Amendment Act 2019 that will be applicable with effect from September 1, 2019. These provisions require no further amendments in the Central Motor Vehicles Rules 1989.

It may be noted that two years after its introduction in the Parliament, the Rajya Sabha passed the Motor Vehicles (Amendment) Bill, 2019 earlier this year to amend the 30-year old motor vehicle law in order to improve road safety, raise penalties for traffic violations, curb Regional Transport Office (RTO) corruption and more.

The bill focused on increasing penalty for traffic violations by five to ten times, depending upon the nature of the offence. Under the amendments, significant penalties for manufacturers failing to comply with vehicle standards can go up to Rs 100 crore and a year in jail. 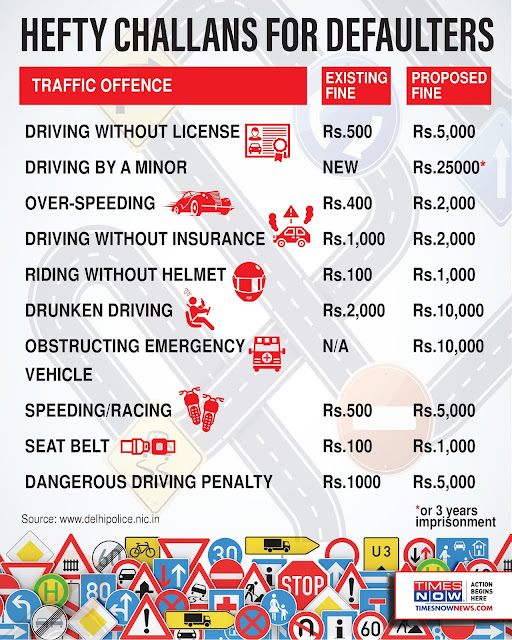 The increased penalties are expected to act as a deterrent against traffic violations. Stricter provisions in respect of offences like juvenile driving, drunken driving, driving without a licence, dangerous driving, over-speeding, overloading etc. Stricter provisions for helmets have been introduced along with provisions for electronic detection of violations.
Under the new rules, Rs 10,000 fine will be charged for not giving way to emergency vehicles such as an ambulance. Rs 10,000 fine will be levied for driving despite disqualification. Aggregators violating driving licences will be fined up to Rs 1 lakh. The provisions also include penalties in the range of Rs 1,000- 2,000 for over-speeding. Driving without insurance will be punishable with Rs 2,000 fine. Driving without helmets will attract Rs 1,000 fine and 3-month suspension of licence……Read more>>
Source:-techiyogiz